You may qualify for 1 of 2 state programs for property tax relief.

Missouri Property Tax Credit Program
Did you know you may qualify for a refund of up to $750 if you or your spouse: 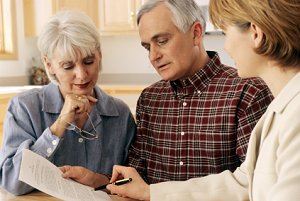 And your total household income, including social security benefits, does not exceed $30,000 for a single individual; or $34,000 for a married couple, and you paid real estate taxes or rent on the home you occupied in 2010.

Frequently asked questions and answers can also be found by visiting the DOR website.

Disabled POW Exemption
Change in the Law
In the November 2, 2010 election, the voters passed House Joint Resolution 15. The measure amends Article X, Section 6 of the Missouri Constitution to read, in pertinent part;

All property, real and personal, of the state, counties and other political subdivisions, and nonprofit cemeteries, and all real property used as a homestead as defined by law of any citizen of this state who is a former prisoner of war, as defined by law, and who has a total service-connected disability, shall be exempt from taxation... (New language bolded).

While other provisions of this section indicate that the general assembly "may" exempt property by general law, this particular provision mandates the exemption without requiring any action of the general assembly. In fact, pursuant to Article XII, Section 2(b) of the Missouri Constitution, the measure will take effect 30 days after the election approving it. The legislature will not have time to specifically define "homestead" for this purpose until after it becomes law.

Until such a definition is forthcoming, assessors should interpret the provision, which originated from a joint resolution, to ascertain the intent of the legislature from the words that are used.

United Pharmacal Co. of Missouri, Inc. -v. Missouri Board of Pharmacy, 208 S.W.3d 907, 909 (Missouri banc 2006). "This goal is achieved by giving the language used its plain and ordinary meaning." Id. at 909. Where a word "...is not defined in the statute, its meaning is ascertained from the dictionary definition." Id. at 912. Black's Law Dictionary (7th) defines "homestead" as The house, outbuildings and adjoining land owned and occupied by a person or family as a residence."

Consequently, to qualify, the applicant for such an exemption:
Proof Required
County records should demonstrate that the Applicant is the owner of the homestead. The applicant for this exemption should provide the assessor with the following evidence: